The results of a clinical study done by the Garvan Institute of Medical Research in Sydney was released on May 5th, 2010. Professor Ken Ho headed the study. Professor Ho is the head of pituitary research at Garvan Institute and is also Chairman of the Department of Endocrinology at St. Vincent's Hospital.

The results were published in the Annals of Internal Medicine.

This study showed that human growth hormone does in fact improve performance in athletes.

The researchers ran a variety of before and after tests. To see whether the subjects noted a measurable improvement in performance the study subjects pulled a weight, performed a standing jump, and sprinted while cycling.

While they saw no statistically significant improvement in the standing jump or weight pulling test the results of the sprint capacity improved significantly. The group who received HGH improved their sprint capacity by 4-5% and the men who were taking both HGH and testosterone saw their capacity nearly double.

According to Professor Ho, a 4.0% improvement in speed over a 10-second period is 0.4 seconds is a huge time interval and could turn a last place finisher into a gold medal winner.

Participants who received human growth hormone also lost fat and gained lean body mass, benefits long attributed to HGH. Those benefits were amplified in the men who received HGH in combination with testosterone.

In the study only low doses of growth hormone were used, much lower than athletes are reported to use, and for a shorter time period.

Professor Ho speculated that the benefits of HGH injections could be even greater than what this study showed, but he added that the side effects might also be increased.

Some of the participants in the eight week study who received injections of HGH reported side effects such as retained body fluid and joint aches.

The World Anti-Doping Agency (WADA) hopes to stop professional and Olympic athletes from using banned performance enhancing drugs. Such drugs are used by those who wish to gain a competitive edge. 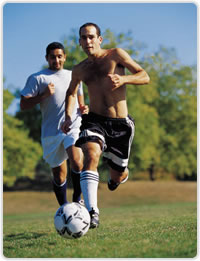 Dr. Don Catlin, a leading expert who ran the anti-doping labs at the Los Angeles, Atlanta, and Salt Lake City Olympics said he feels the researchers could have and should have done the study using elite athletes.

As for the of lack of improvements seen in the weight pulling and jumping part of the study, Dr. Doug Richards, director of the University of Toronto Sports Medicine Clinic and a former Toronto Raptors team physician, said the findings don't prove that HGH wouldn't help there as well.

"The findings might have been different if the dose used had reflected how human growth hormone is actually used by athletes who are training many hours a day every day. These people weren't training like weightlifters. In other words, they haven't looked at the interaction effect of Olympic level exercise with appropriate doses," Dr Richards stated.

Dr. Gary Wadler, chair of the committee that compiles WADA's prohibited list, welcomed the new findings, although he fretted about the consequences of now having scientific proof that HGH works, particularly in combination with testosterone.

"I think this is good science, but it underscores the problems we are dealing with in trying to control this," said Dr. Wadler, who is the author of the book "Drugs and the Athlete" and is also an associate professor of medicine at New York University.

My Thoughts and a Safe Alternative to HGH Injections

Although I have personally known of the many potential benefits of human growth hormone therapy for many years, I am very pleased that the Garvan Institute did this study and the Annals of Internal Medicine published it. There are always skeptics, even with the clinical studies that have already been done, and some have claimed that HGH does not enhance performance. Hopefully this latest study will help them to consider re-thinking their position.

I do want to say that I don't believe athletes who compete should take performance enhancing drugs to gain an unfair advantage, and I am definitely against those in their teens and 20's taking HGH injections. I do however believe those who are feeling the effects of aging due to decreased growth hormone levels should be allowed to take a non-injection product to help them safely restore their HGH back to a more healthy level.

During the past 22 years we have heard numerous reports of success from those taking our FDA registered homeopathic products.

Regarding clinical studies, physicians carried out an independent randomized double-blind placebo controlled IGF-1 clinical study using our HGH formula over a five month period. The results showed the highest increase of IGF-1 levels (used to measure growth hormone in the body) ever obtained with a non-prescription product.