How HGH and IGF-1 May Affect Diabetes 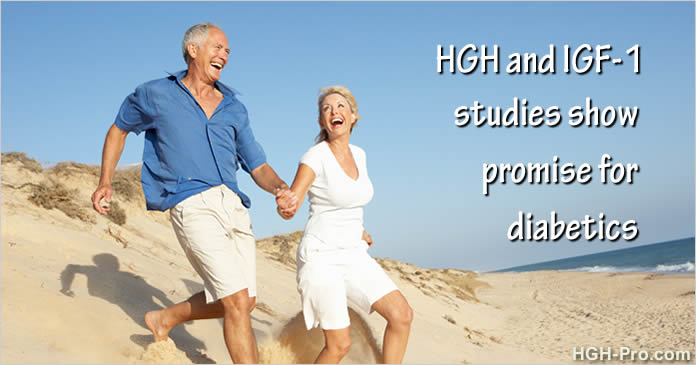 Diabetes Mellitus, (sugar diabetes) is a disorder in which the body is unable to process carbohydrates (sugars and starches) properly.

Most carbohydrates are converted into glucose by the body, which is the form of sugar the body uses. As the blood glucose level rises the pancreas is stimulated to secrete insulin. The hormone insulin then acts to reduce the sugar content in the blood by transporting the glucose from the bloodstream to the body's cells where it is used as fuel, or to the liver where it is stored until it is again needed as fuel.

When the pancreas does not produce enough insulin or if the body cannot use the insulin that is produced diabetes is the result. Sugar concentrations build up in the blood as the glucose circulates through the body without being absorbed.

The Types of Diabetes

This type of diabetes is brought about as a result of the pancreas not producing enough insulin. This type is frequently caused by an autoimmune response where the body's own immune system attacks and damages the pancreas.

This type is also called insulin resistant diabetes. With Type 2 diabetes the cells become resistant to the effects of insulin and so the glucose is not carried into the cells where it is needed but remains in the bloodstream. Obesity can contribute to this problem because the numerous fat cells displace the insulin-receptor cells.

Aging causes the cells of the body to begin to lose their ability to properly utilize the insulin that the pancreas produces. This process usually makes itself known in those over 35 years of age.

As aging progresses the less efficient the cells become at utilizing the insulin in the blood and so the result is a bloodstream that contains high levels of both glucose and insulin. High levels of glucose or insulin can affect your metabolism as well as your heart and arteries.

Human growth hormone (Somatotropin) once thought of as a hormone only important for the normal growth and development of children is now being called the fountain of youth.

HGH is not the fountain of youth but it's the closest we have come to finding it. Groundbreaking research has found human growth hormone to be just as important for adults as it is for children. Clinical studies support the idea that decreased human growth hormone in the adult body plays a major role in bringing on the effects of aging. There are also clinical studies showing that restoring HGH can improve certain health conditions such as type 2 diabetes.

Dr. Bengtsson's study had first shown that growth hormone caused increased insulin resistance, however, after six months of HGH therapy his patient's insulin sensitivity returned to where it had been before the therapy.

There are some indications that human growth hormone may actually improve diabetes. A study done at John Hopkins about the effects of HGH on blood glucose supports the idea that when elderly people have low human growth hormone they also have more intra-abdominal fat and their insulin acts less well.

In this situation they have a tendency to have high blood sugar. If these elderly people are given growth hormone therapy correctly, rather than excessively, their blood sugar levels should improve rather than worsen.

Thierry Hertoghe, MD, who specializes in hormone replacement therapy in Brussels believes that human growth hormone helps to promote the action of insulin. He believes that because HGH helps to direct the insulin to put glucose into the muscular cells, cardiac cells, and nerve cells, rather than the fat cells of the body HGH may actually help to improve diabetes.

Greg Fahy, Ph.D., of the Naval Medical Research Institute has stated that he may have discovered a method to possibly cure adult-onset diabetes using HGH. He has stated that his own experiments have shown that human growth hormone is very beneficial for diabetes.

Human growth hormone exerts most of its effects through the powerful growth factor called IGF-1.

The study found that IGF-1 at 100 mcg per kilogram of body weight given twice daily enhanced the body's protein metabolism in the same way as human growth hormone did.

Instead, the test subjects who received IGF-1 and prednisone had normal glucose metabolism. The researchers saw this as remarkable because glucocorticoids are known to decrease insulin sensitivity and suppress the circulating insulin in the body. These researchers believe IGF-1 offers much promise in the treatment of protein catabolic states.

The Effects IGF-1 Has on Diabetes

Two 1997 double-blind clinical studies showed that recombinant IGF-1 injections can reduce the need for insulin in patients with insulin-dependent diabetes by up to 45%. One study involved 8 adults aged 24 to 49 years and 43 children and teenagers aged 8 to 17 years.

While these trials lasted 19 days and four weeks and were short term trials, the fact that these test subjects saw such a drop in their insulin requirement and they had no serious side effects make IGF-1 a promising treatment of diabetes.

While in these short term studies IGF-1 therapy did not completely do away with the need for insulin it did improve the control of blood sugar and so may help prevent the complications of diabetes.

Other HGH, Anti-Aging, and Health Articles by Lisa Wells, RN