Designed To Support the Telomeres and DNA!

The body heals and rejuvenates itself by replacing the old and damaged cells with new and healthy functioning cells. This new cell growth is brought about in large part through stimulation from the body's growth factors that come from human growth hormone.

Over the past 20+ years we have remained at the forefront of effective and safe HGH therapy by offering the most advanced non-prescription human growth hormone supplements available.

Telomere length is a major marker for biological aging!

This is the improved version of our previously popular DNA/RNA product. By adding the focus of extending the life of the body's cells through telomere lengthening we now offer a more complete line of safe and effective homeopathic products to cover the important areas of anti-aging therapy!

This new supplement contains ingredients that are on the cutting edge of the latest anti-aging research. It contains cycloastragenol 98% (CA-98), DNA, RNA, and other supportive ingredients in safe homeopathic form.

ProBLEN Telomere/DNA is specially formulated to help lengthen the telomeres and repair and restore the DNA structure. 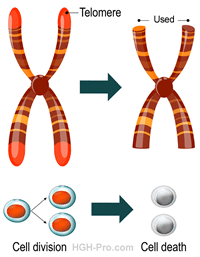 However, each time DNA is replicated and a new cell is made a small amount of the telomere is used and so it becomes shorter. Once the telomere runs out the cell can no longer replicate and it dies.

Telomerase is an enzyme made by the body and whose job is to lengthen the telomeres by adding more repeating sequences of DNA to the telomere thereby extending the life of the cell. Telomerase binds to the ends of each telomere through an RNA template that is meant to be used to attach a new strand of DNA.

ProBLEN Telomere/DNA contains the one ingredient that has been shown in clinical studies to activate the telomerase enzyme that lengthens the telomeres. That ingredient is Cycloastragenol 98% (CA-98).

Contains Ingredients That Protect the Telomeres and DNA

Oxidative stress is well known to accelerate telomere shortening, but clinical studies have shown that certain antioxidants can delay their shortening. This supplement contains those important antioxidants such as glutathione and carotenoids.

Besides all the new ingredients it also still contains DNA and RNA.

Why Do We Need DNA Support?

"Knowing what we now know about the causes of aging, if repairing your DNA is not at the forefront of your effort, then your success will be minimal to meaningless."

"DNA is our life source. Just improving a small percentage of our total DNA can make a major difference in the quality of our health, well being and longevity."

As age progresses the human body wears out and becomes damaged, including the body's DNA which is the blueprint of life.

As previously stated, in order for the body to rejuvenate itself the cells must be continuously replaced. When the cells are replicated they are supposed to be perfect copies. However, as age progresses and the DNA becomes damaged the new cells that are made will not be perfect copies of the cells that were produced at a younger age.

The more damaged the DNA becomes the less our body is able to properly rejuvenate and heal itself by replacing the old worn out and damaged cells with healthy perfect cells.

Telomere/DNA is designed to safely and effectively address these issues.

Ingredients are non-GMO and do not contain corn or gluten.

Sublingual Spray. Each bottle is a 30 day supply.

Cycloastragenol 98% (CA-98) - a component of the astragalus herb, standardized to 98%. Astragalus itself, also known as huáng qí, has been used as far back as ancient China for longevity and other health issues.

DNA - is a self-replicating material that is made up of nucleotides and contains the blueprint of life. It carries the genetic instructions for making all proteins in the body. The sequence of nucleotides determines individual hereditary characteristics.

RNA - is a nucleic acid whose primary purpose is to transmit genetic information about protein synthesis to DNA.

Pituitarum - a glandular that is known to help balance the endocrine glands.

Glutathione (GSH) - is one of the most important antioxidants in the body. It helps to protect the cells from free radicals and toxins. It has been shown to regulate telomerase activity and slow the shortening of the telomeres.

Carotenoids – Lutein/Zeaxanthin Blend - are natural antioxidants. High levels of carotenoids have been found in clinical studies to be significantly associated with longer leukocyte telomeres.

Omega 3 - is a fatty acid that has been shown to slow the shortening of telomeres. Also, a study done by Ohio State University showed that the lengthening of immune system telomeres was more prevalent in people with a balanced ratio of omega 3s to other fatty acids in their diet.

Vitamin B Complex - are B vitamins that have been shown to have a positive impact on telomere length and DNA repair. They dispose of homocysteine which can build up and cause shortening of telomeres. The B vitamins play an important role in DNA repair.

Vitamin C - a vitamin that is a strong antioxidant. In clinical studies cells treated with vitamin C showed longer telomeres, reduced secretion of inflammatory cytokines, and improved integrity of their cellular nuclei, which are all features of much younger cells.

Vitamin E - is made up of four tocopherols and four tocotreniols. In studies alpha-tocopherol was found to slow the shortening of telomeres. Gamma-tocotrienol not only prevented telomere shortening but also enhanced the viability of older cells by reversing the age induced changes to cells related to DNA damage.

Article: Why We Need to Repair Our DNA

This top quality supplement is made in an FDA approved lab with the finest U.S. pharmaceutical grade ingredients. 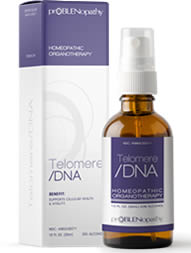