We are pleased to announce that we have improved the formula of this homeopathic HGH releaser spray. It contains potencies of certain amino acids and other ingredients that have been shown to stimulate the pituitary gland to release growth hormone, such as l-arginine pyroglutamate, ornithine alpha-ketoglutarate, and coleus forskohlii, and now we have added CDP-choline (citicoline) and GABA to our custom formula.

*This supplement does not contain homeopathic growth hormone itself, as our other two HGH supplements do. It has been specially formulated to gently coax the pituitary gland to increase its own release of growth hormone. No prescription required in the U.S.

This homeopathic spray may be taken alone or it may be taken in concert with our HGH Plus IGF-1 & IGF-2 or HGH product. Complex may be taken with these products at night and also during the time when we cycle off them.

Why is HGH Complex Different Than Other Amino Acid Containing Supplements?

The products that are digested usually contain large doses of certain amino acids. Taking mega doses of those amino acids may not be a long-term answer because they may cause digestive and other issues.

Taking large doses of certain amino acids long-term may cause liver and kidney issues and may possibly cause a nitrogen imbalance. Lastly, the pituitary gland and hypothalamus may become resistant to long-term stimulation by amino acids.

HGH Complex contains the amino acids that have been shown to increase growth hormone release but they are in safe homeopathic form. They are not contained in the usual capsule form that must be digested, they are administered in a liquid sprayed under the tongue.

Since all the ingredients in this product are in homeopathic form the amino acids do not have to be broken down by the liver or cleared by the kidneys and so they won't increase ammonia levels or cause the other issues that have been previously mentioned.

How Do Homeopathic Ingredients Work?

Homeopathic supplements contain the electromagnetic energies of the active ingredients so they are measured in homeopathic potencies rather than weights such as milligrams. Since only the electromagnetic energies are received there is no risk of getting too much of the ingredients. For this reason the side effects that may be seen when digesting large doses of amino acids or other ingredients will not occur when taking this product.

More About the Workings of Homeopathy.

Ingredients are non-GMO and do not contain corn or gluten.

Sublingual spray. Each 30 ml bottle is a 30 day supply.

Blank progress form to print and use

Information About the Ingredients in HGH Complex

L-Arginine Pyroglutamate is an amino acid that is known to stimulate the release of growth hormone by blocking the release of somatostatin by the hypothalamus.

L-Glutamine is one of the most abundant amino acids in the body. It stimulates the release of growth hormone releasing hormone (GHRH) by the hypothalamus.

Glycine is an amino acid that has been found to be a stimulator of growth hormone release by the pituitary gland.

L-Lysine is an amino acid that works in combination with l-arginine to boost the release of growth hormone by the pituitary gland.

Ornithine Alpha-Ketoglutarate is a combination of two amino acids. It works as a precursor to arginine which stimulates HGH release.

CDP-choline (Citicoline) is a precursor of phosphatidylcholine, glycerophosphatidylcholine, and acetylcholine. It has well documented neuroprotective effects and it supports memory and attention span. Clinical studies have shown that it positively affects the secretion of growth hormone by the pituitary gland. CDP-choline also increases glutathione synthesis, augments glutathione reductase activity, and maintains mitochondrial cardiolipin levels.

GABA is an amino acid/inhibitory neurotransmitter that has been shown in clinical studies to increase the production and release of growth hormone.

Coleus Forskohlii is an herb whose root contains forskolin, which works to inhibit the enzyme adenylate cyclase that blocks the formation of cAMP. Forskolin-induced elevation of cAMP has been found to provide many health benefits including the stimulation of growth hormone release. 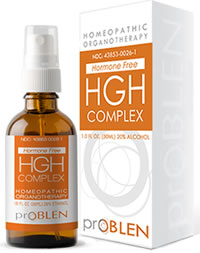