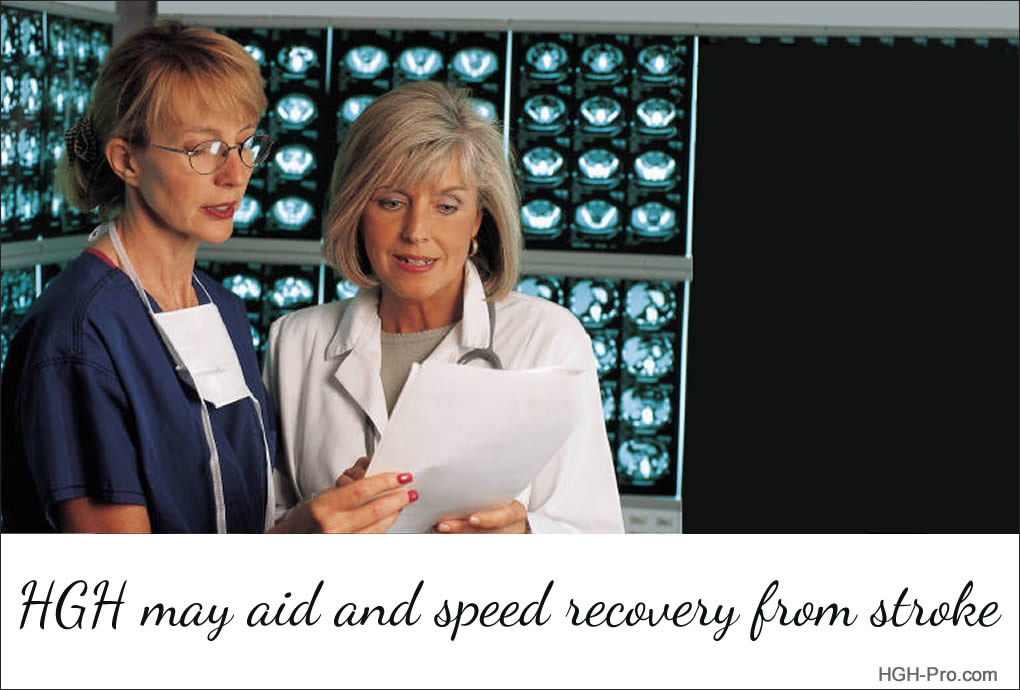 IGF-1, the main growth factor that comes from growth hormone is believed to help decrease the apoptosis (cell death) that can occur after a cerebral vascular accident (CVA, stroke) has occurred.

An international brain conference in Melbourne, Australia presented research from New Zealand in which lab rodents that had sustained a CVA were injected with growth hormone. These rodents completely recovered their movement within only seven days!

Human growth hormone has been in the news much lately; with some praising the many benefits of HGH while others condemn any type of therapy related to restoring this hormone that decreases with age.

The research done by Arjan Scheepens, Praneeti Pathipati and colleagues at the University of Auckland provides even more evidence of the importance of human growth hormone to the body and brings to light more potential benefits of HGH therapy.

Research has shown that human growth hormone often appears in the brain as part of a self-protective mechanism after an injury such as stroke so the researchers injected the rat's brains with HGH beginning on the fourth day after the stroke and continued the treatment for six weeks.

"The rats regained 100% of their motor skills within seven days, much faster than untreated animals, and their memory functions improved as well."

"Because people have been using GH for 50 years its pharmacological safety is well known, so we think clinical trials on humans could start pretty much straight away."

"The most exciting aspect of our breakthrough is that it shows a positive effect when the growth hormone is given at a point in time much later than those first hours. The rats received injections four days after the stroke, and there was significant improvement."

New research also reveals the treatment could enhance the recovery of people who sustain brain trauma, including newborn babies whose brains are injured because of oxygen deprivation.

Larissa Joy Christophidis, Thorsten Gorba, and colleagues also did a study where the aim was to ascertain whether growth hormone (GH) could be a post CVA neuro-restorative treatment.

They examined the growth hormone receptor (GH-R) immunoreactivity inside the subventricular zone (SVZ) in the brain of juvenile rats after injury and they tested the proliferative capacity GH had on embryonic mouse neural stem cells.

Five days after brain injury the growth hormone receptor immunoreactive activity in the ipsilateral subventricular zone was significantly increased versus the contralateral SVZ and coincided both spatially and temporally with injury-induced neurogenesis. The GH-R immunopositive cells in the ipsilateral SVZ was found to include proliferating cells, neural progenitor cells, and post-proliferative migratory neuroblasts. Stimulation of embryonic mouse NSCs with physiological concentrations of rat pituitary GH elicited a dose-dependent proliferative response.

The study results indicated a positive role for growth hormone and its receptors related to injury-induced neurogenesis and suggested that GH therapy may potentiate the body's ability to heal the brain after injury.

At the conference Dr. Arjan Scheepens mentioned that GH therapy is now being promoted as an anti-aging (rejuvenation) therapy by an industry that has been viewed with skepticism by some doctors and scientists.

He said that the traditional opinion that the brain does not have the capacity to regenerate itself has been debunked.

"In the last 10 years the neuroscience world has accepted that you do make new neurons throughout your life, and that is particularly important for memory and cognition. Neurogenesis is an established fact."

IGF-1 - the Main Growth Factor of Health and Rejuvenation

Growth Hormone and the Aging Brain

A Complete List of HGH, Anti-Aging, and Health Articles by Lisa Wells, RN