HGH Plus IGF-1 & IGF-2 For Bodybuilders and Athletes

Clinical studies have shown that human growth hormone and its growth factors build muscle, increase strength, stamina, and performance, strengthen the bones and joints, speed healing and recovery and more. However, to receive the benefits you need to take a product that works.

No other single supplement on the market contains homeopathic human growth hormone, IGF-1, IGF-2, alpha GPC, and velvet deer antler in the correct amounts needed to provide the benefits you are wanting.

Bodybuilders, athletes and fitness oriented individuals who want to enjoy the benefits of human growth hormone safely are choosing our HGH Plus IGF-1 & IGF-2 product.

Dr. Di Pasquale, who is an expert in performance-enhancing compounds believes that HGH taken with IGF-1 works better due to the feedback mechanism between the human growth hormone in the pituitary gland and the IGF-1 in the liver. Bodybuilders are taking both in order to receive the best possible benefits.

IGF-1 is 10 times more potent than HGH. The magazine Muscle Mass 2000 has stated that "IGF-1 may be the most potent bodybuilding substance ever found". 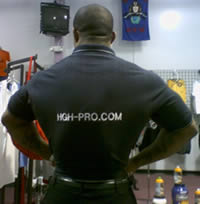 Bodybuilders have called the increases in lean body mass and strength seen with IGF-1 "incredible". Some bodybuilder's say they have put on up to 20 lbs of muscle mass. Others say they have dropped 5% body fat in only one month of therapy while at the same time increasing their strength and lean muscle.

This powerful but safe substance has been called a "natural steroid" because it offers many of the same benefits, but it does not carry the same risks and side effects as man-made anabolic steroids.

It has been used successfully by Russian and European Olympic athletes and professional bodybuilders consistently for decades due to it's ability to increase strength and muscle tone, build and sustain healthy bones and joints, increase stamina, increase flexibility, improve recovery and healing, decrease muscle and joint pain, and for general anabolic improvements.

More information about the ingredients and components in HGH Plus IGF-1 & IGF-2.

Researchers at the University of Alberta, Canada tested deer velvet's ability to increase strength and endurance on cadets from the Edmonton police academy. The researchers found that the use of deer antler velvet significantly increased blood plasma testosterone levels in the men participating in the study.

In Russia deer antler velvet is called Pantocrine. Dr. Arkady Koltun, M.D., Ph.D., Chairman of the Medical Committee for the Russian Bodybuilding Federation, conducted research into anabolic agents that can improve performance, strength and musculature in Russian bodybuilders and athletes. Deer antler velvet was one of the agents studied.

All of his athletes who added velvet antler to their program received Olympic gold medals and established new world records.

Dr. Koltun also reported an interesting phenomenon that occurs in athletes who are over trained. He explained that when athletes train too hard they develop an electrolyte imbalance in the heart muscle, in which there is a loss of recovery and endurance. He calls this condition "Myocardial Dystrophy"and explained that electrocardiograms show dysphasic and extreme negative T-wave readings, which is an image of ventricular repolarization of the cardiac ventricles.

Dr. Koltun contends that sportsmen and women with myocardial dystrophy have a problem with myocardial repolarization which significantly limits their performance. He found that by having them lay off their training for two weeks and having them take deer antler velvet along with vitamin B-6 and inosine he was able to decrease their recovery time to 10 days. Because their recovery time was dramatically reduced they were able to participate in many competitions, with short recuperation periods in between.

A Truly Remarkable Increase in Performance!

Research by two Russian doctors also found that velvet antler improved the performance of average, healthy sportsmen and athletes. Unadministered athletes on the exercise cycle performed 15 kg/m of dynamic work whereas those given velvet antler dramatically increased their dynamic work to 74 kg/m!

New Zealand Clinical Study - One of the most well-publicized studies of deer antler velvet was a double-blind clinical trial of New Zealand athletes. Volunteers were divided into two groups, with height, weight, and age closely balanced.

The first group received 70 mg of deer antler velvet extract per day for 10 weeks, while a control group received a placebo. Subjects underwent moderate flex and weight training, and were tested twice during the 10-week period and once following the 10 weeks. The athletes were also scanned with a Dual X-Ray Absorptiometry Scanner (DEXA) before and after the trial to determine any changes in body composition.

The researchers found that muscular endurance doubled among the deer velvet group, tending to support the assertion of previous studies that it improves muscle activity.

ProBLEN HGH Plus IGF-1 & IGF-2 is designed to safely assist the body to increase and balance HGH and its growth factors to optimum levels and help the body better utilize them at the cellular level.

It is the secret weapon for both male and female bodybuilders and athletes because it can enhance their workouts and help them to build muscle, increase strength, endurance, speed recovery, etc.

We believe in this product so much that we aren't afraid to put it to the test. Check your blood IGF-1 level, which is used to measure growth hormone in adults. Then begin taking this product within two weeks of the test. Take it for a full 90 days (three bottles) and then repeat your IGF-1 test within one week of finishing the 90 day supply. If your IGF-1 level has not improved we will refund you for those three bottles! Click on the guaranteed banner above for full details.

Attention Ladies: This product will not give you large muscles unless you lift heavy weights. It should help to shape and tone you by improving lean muscle and decreasing fat.

*Those in their 20's and younger should not take any type of hormonal therapy without their doctor's consent. 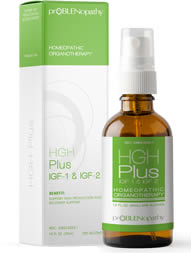 Click below to enter our store for specials, to read reviews, and to order.

Please visit the other links throughout this page for much more information.

HGH Information For Athletes and Bodybuilders

Increase Your HGH and Testosterone With Our Muscle Building Combo!