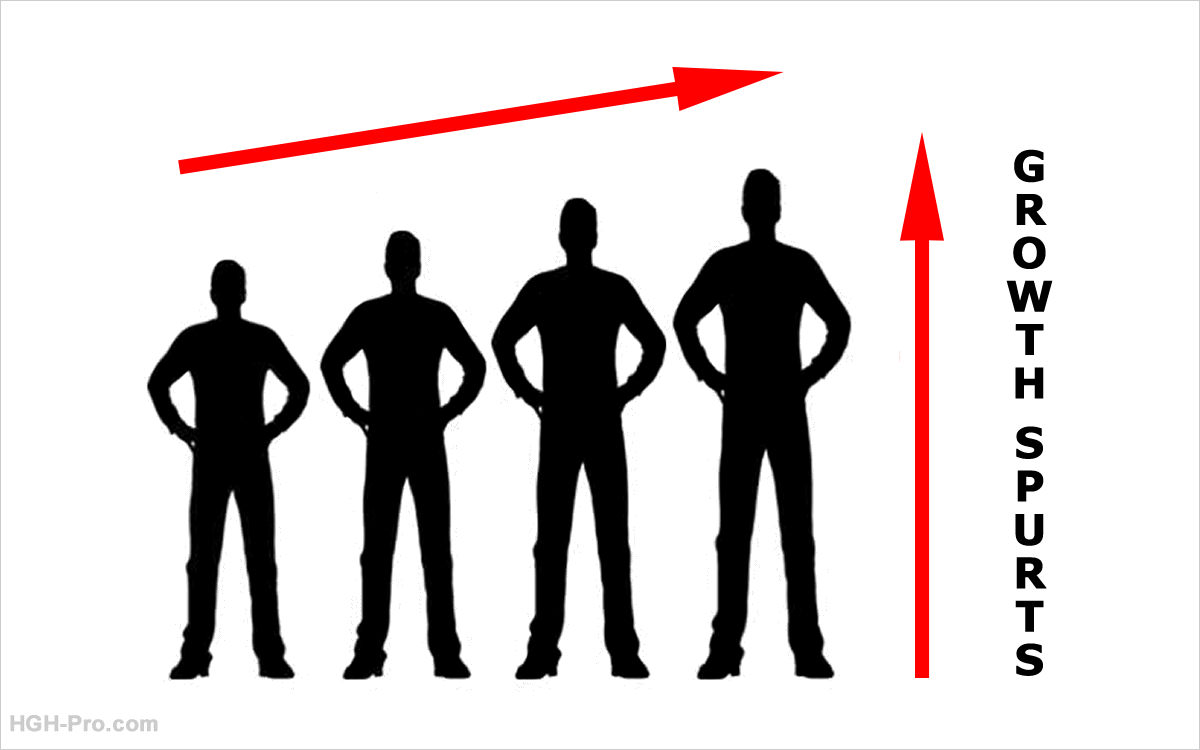 This is a post from our forums. I am moving it here because I feel that others may have had similar experiences to what these young people had. Maybe it will be helpful.

Question: I want to know why I never had a growth spurt. Plenty of people have had late growth spurts, from notable sports figures and celebrities to normal people. I'm tired of hearing these stories knowing that I never got a fair shake. I want to know what made these people shoot up like weeds.

They did not "get lucky". They were not "blessed". They did something, or something happened to them, which forced a growth spurt. I never did anything to stunt my growth. I ate the occasional fast food and sweets, but for the most part, I ate the diet our parents always told us to - lots of lean meats, fish, chicken, vegetables, fruits, water, and Flintstones(:

Like every other teen, I occasionally smoked herb and drank alcohol, but not excessively. I never did any hardcore drugs. Ever. I was never sleep deprived. I entered puberty at a normal age. By the 6th grade, I noticed hair growing in my genital area.

Also, since that time, I have always worn a size 11.5 to 12 shoe, which is normally an indicator of taller stature. I am now 25, and have not grown since the 10th grade. It doesn't make any sense. I never had a growth spurt. Do I have a hgh deficiency?

I was pretty active, lifting weights and playing football. Didn't do any drugs. Had a healthy diet. I'm an only child. My father is 6'1", my mother is 5'4". My grandpa was 6', and my grandmother was 5'5". Even by the parents height plus 5 inches divided by 2', I should be much taller. But through my research, I have discovered that equations like that, as well as other things like diet, exercise and genetics, are useless. None of them hold water.

Here are some examples: my mother's best friends two sons are 6'2", and 6'8". Their father is 6'2", and their mother is 5'4", the same as my mother. The two sons were never active, never played sports, smoked a pack of Marlboro reds a day or more since they were 13 and still do to this day, did hardcore drugs, like cocaine, heroin, huffed inhalants, and drank hard liquor constantly. Their diet was not much to be complemented either.

How is it, that their family's height is almost exactly the same as mine, but they ate poorly, drank, smoked and did drugs like it was going out of style, and they are 6'2" and 6'8", meanwhile, I'm eating a steak with green beans and corn, and abstaining from drowning myself in narcotics liquor and cigarettes and I'm 5'6". It doesn't make any sense. Some sort of deficiency?

One of my high school's best ballplayers had a father that was 5'5" and the mother was the exact same height, yet junior year he went from 5'4" to 6'7", and now plays for wake forest and has actually grown to 6'9" since high school according to his stats page. It just doesn't make any sense whatsoever.

There are say people with circumstances that defy the normal explanations and common myths that people accept as fact to continue believing them. As a story closer to home, my mother told me about a guy that was 5'7" all throughout high school, all to come back from the military at 25 years old at 6'7".

All of these players parents did not have parents as tall as them. UFC fighter Cody Garbrandt graduated high school at 5'6", and was listed in amateur fight promotions at 5'8", and is now listed on Google at 5'9". Paul George went from 5'5" as a high school senior to 6'3" as a sophomore in college. Jrue Holiday went from being 5'8" all his life to growing to 6'9" in college. Jeff Bagwell went from 5'6" to 6'3" at age 23.

Again, these people did not just get lucky. They did something, or something happened to them, or within them, and I want to know what it is. It was not genetics, diet, or lack of doing drugs and alcohol. There is something specifically that made it happen.

There are so many people that make claims on why people grow tall or stop growing, when it happens, when it begins and when it stops, and none of it holds true. I want to know the truth. I want to know what really makes it happen, so that I can get on the right track.

I want to know what actually makes the human body grow taller. If it's hgh or igf-1 or whatever I want to know what I can do and how to go about it. It's 2016 and with all the medical advancements we enjoy, there's no way that a way to force a growth spurt is not known. Whether it was something natural that these people did, or something that naturally happened to them. Either way I want to know what it is. I want to forcibly induce my growth spurt that I got cheated out of. Anyone with any insight I thank you greatly in advance.

Answer: Hello, I actually hear this quite a bit, and I wish I knew the complete answer. Genetics do play a role in what our height has the potential to become, so even though a tall person's parents or siblings may not be a certain height, usually there are others in their family tree who had good height.

The way I understand it is that we carry traits from our parents, grandparents, etc., but not all of those traits are activated. Only one will be dominant in each of the many, many areas. For instance, if your mother's side of the family tended to be more tall and your father's side tended to be more short, your dominant trait for height could be either. It seems like it is the luck of the draw.

Lack of proper nutrition can play a role but I think only severe deficiencies would stunt growth. From what you said I feel sure it was not the reason you did not notice a good growth spurt.

I have heard positive reports from some whose growth plates were still open and they took our HGH Plus IGF-1 & IGF-2 product. Of course this is hard to measure since we don't know what their growth rate would have been without the product, but they reported that it helped.

Unfortunately, once the long bones fuse there won't be any additional natural long bone growth. Once fused the only way HGH can increase height is by increasing the bone density, and this would not be recommended for someone who has an optimum density already. It is good for those who have lost bone density due to aging or health issues though.

The other option would be bone lengthening surgery, which I hear is pretty expensive at this time, although I'm sure the price is coming down as it becomes more common. I do wish you the best.

How to Increase Height

Question: Hello, I'm 16 years old and I want to grow even more, whether you can tell me whether there is hope? What should I do if I grew, I live in a country where I can not do any tests, because doctors are not experts.

Answer: I recommend you try to eat a healthy diet with plenty of protein and vegetables. Strength training and stretching may also help.

If you are wanting to find a product to take we offer a great product that contains homeopathic human growth hormone (HGH) and also contains the growth factors IGF-1 and IGF-2 and velvet deer antler, which is the best known natural source of growth factors including bone growth factors. If interested please ask your doctor about trying it. Most doctors are familiar enough with homeopathic medicine to know that it is considered very safe.

Questions and Answers About HGH and Hypothyroidism

PLEASE NOTE: The information provided is not meant to be medical advice. Please consult your private healthcare provider.